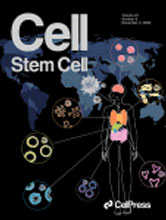 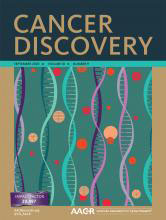 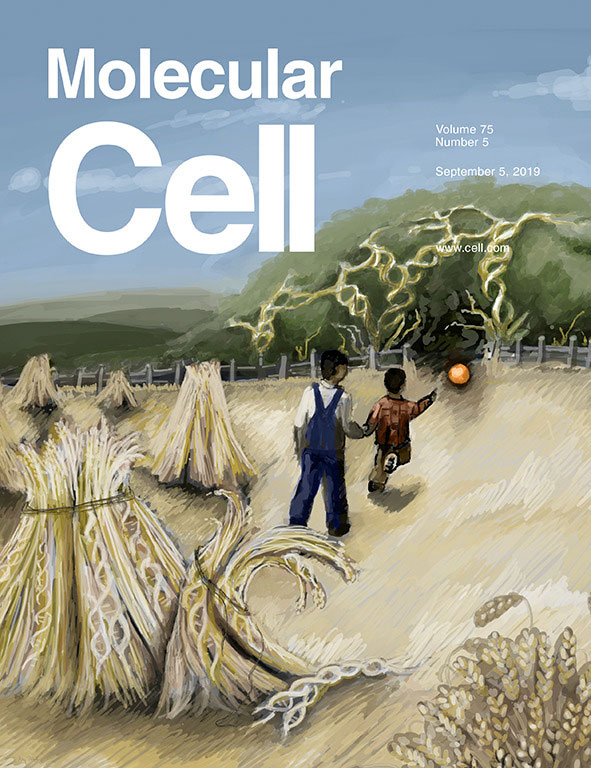 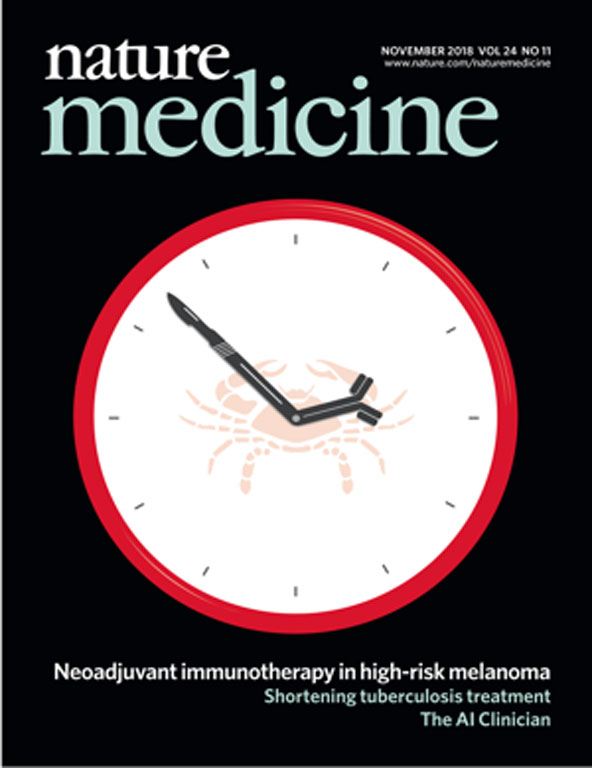 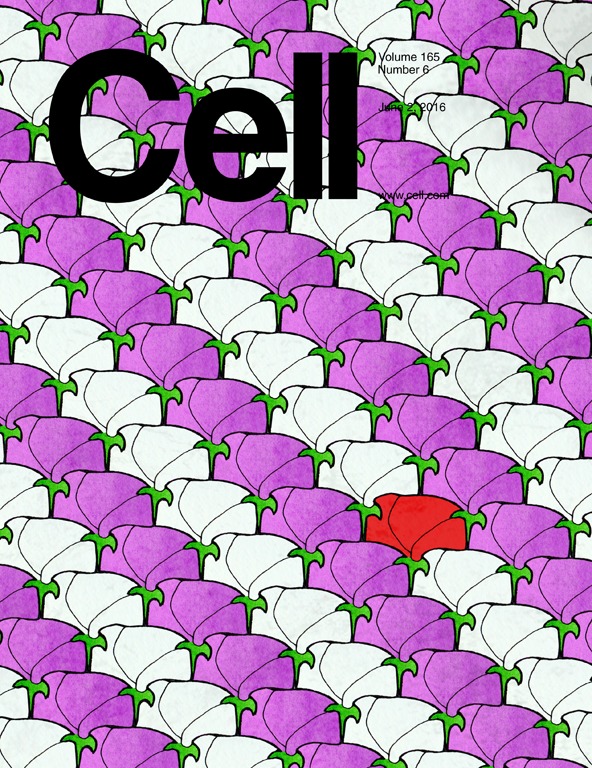 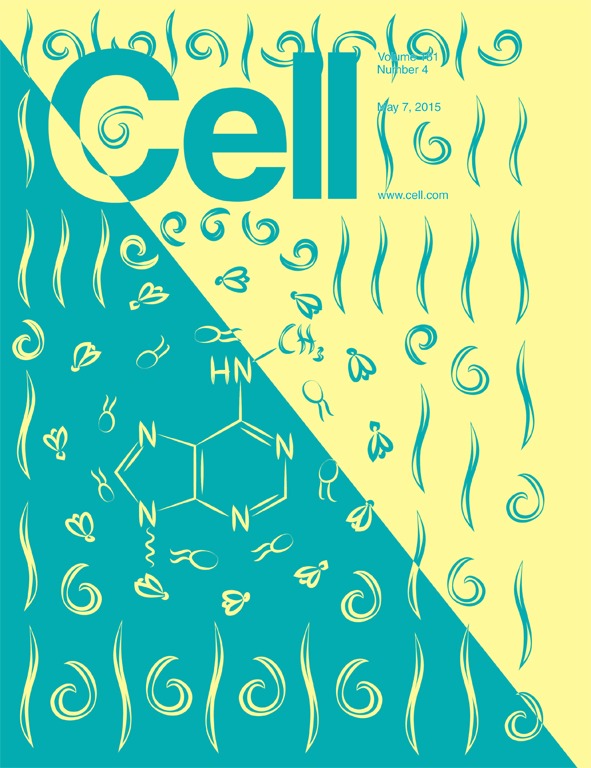 AACR and MPM Oncology Charitable Foundation announced three grants to support transformative cancer research and our lab was one of the recipients. This funding mechanism is an innovative partnership between the American Association for Cancer Research (AACR) and the UBS Oncology Impact Fund (OIF) managed by MPM Capital. With support from this grant, we will expand on our research on the role of our newly discovered orpan non-coding RNAs to serve as building blocks for cancer-engineered regulatory programs. 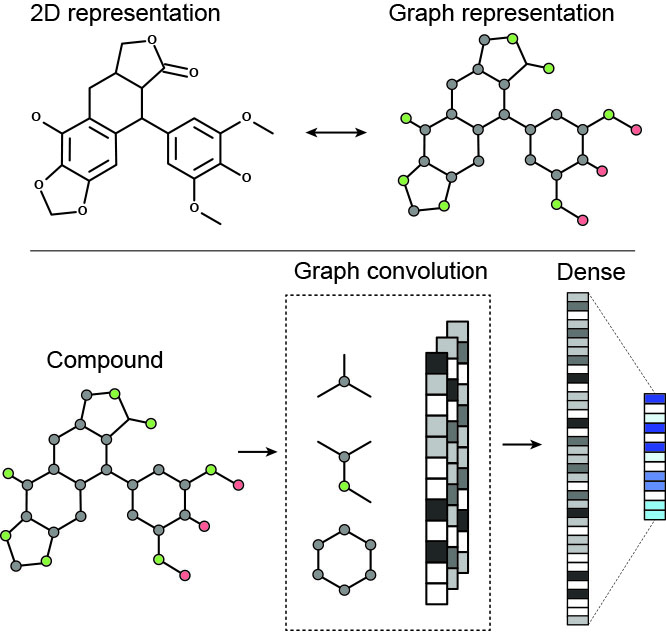 With widespread societal and economical devastation, the new coronovirus pandemic has deeply reshaped our approach to life and how we do science. The heterogeneity of patient response to this virus remains a baffling mystery that complicates clinical response. Age was determined as a clear risk factor; however, it was soon discovered that risk of mortality from this infection is substantially higher in men. Recently, members of the Fattahi lab carried out a systematic in vitro screening of stem-cell derived cardiomyocites to identify regulators of ACE2 expression, an enzyme that acts as the receptor for SARS-CoV-2. We levergaed this valuable screen to train a deep learning model that is capable of large-scale in silico screens to identify other compounds that can target ACE2 expression. Systematic analyses of these hit compounds revealed Andregen signaling as a key pathway involved in ACE2 expression. Confirmatory analyses in the UK Biobank dataset revealed a consistent association between androgen levels and COVID-19 risk. This work is published as a research article in Cell Stem Cell and an eariler manuscript describing these results was published as a preprint. You can also read an interview with Dr. Faranak Fattahi putting some of these findings in context. 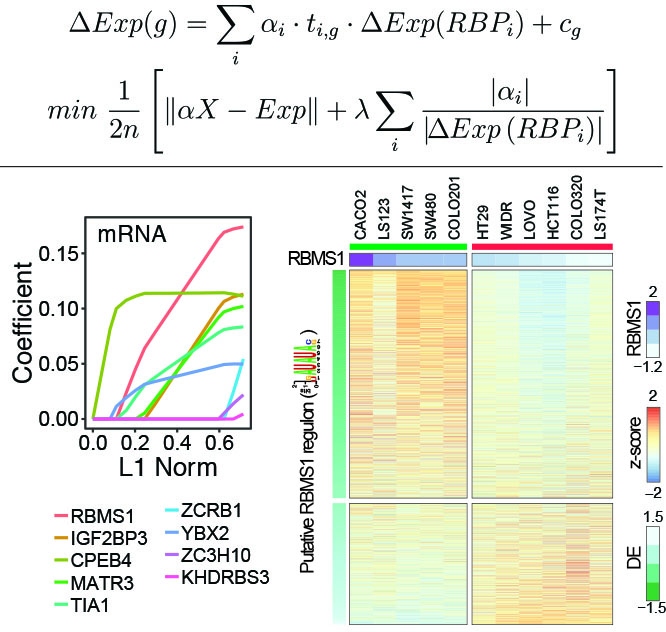 PRADA, a customized Lasso regression model, reveals RBMS1 as a suppressor of metastasis in colon cancer

Identifying master regulators that drive pathological gene expression is a key challenge in precision oncology. Here, we have developed an analytical framework, named PRADA, that identifies oncogenic RNA-binding proteins through the systematic detection of coordinated changes in their target regulons. Application of this approach to data collected from clinical samples, patient-derived xenografts, and cell line models of colon cancer metastasis revealed the RNA-binding protein RBMS1 as a suppressor of colon cancer progression. We observed that silencing RBMS1 results in increased metastatic capacity in xenograft mouse models, and that restoring its expression blunts metastatic liver colonization. We have found that RBMS1 functions as a post-transcriptional regulator of RNA stability by directly binding its target mRNAs. Together, our findings establish a role for RBMS1 as a previously unknown regulator of RNA stability and as a suppressor of colon cancer metastasis with clinical utility for risk stratification of patients. We recently reported these findings in the journal Cancer Discovery. You can also read the commentary graciously written by Dr. Hannah Carter for this work in the same issue. 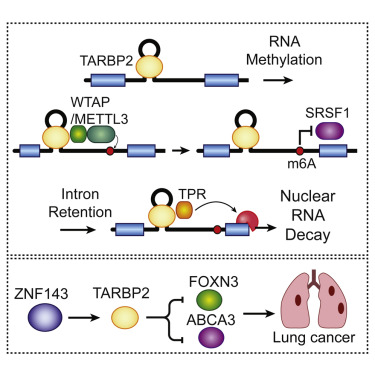 Nuclear TARBP2 as a regulator of RNA stability

In our most recent paper, we have reported the functional dissection of a previously unknown pathway of RNA decay. This study was a follow-up to our discvoery of TARBP2 as a promoter of breast cancer metastasis (see here). In this collaborative work, we systematically dissected the molecular mechanism through which TARBP2 regulates the expression and stability of its target regulon. Based on our model, TARBP2 binds target pre-mRNAs co-transcriptionally and recruits the RNA methylation machinery to add m6A marks. RNA methylation, in turn, influences the binding patterns of splicing factors such as SRSF1 and diminishes efficient splicing of introns. Through its interaction with components of the nuclear surveillance machinery, TARBP2 delivers these mis-spliced products to the exosome complex for degradation. Finally, we also showed that TARBP2 not only promotes breast cancer metastasis, but also acts as an oncogene in lung cancer cells. See our published work here. 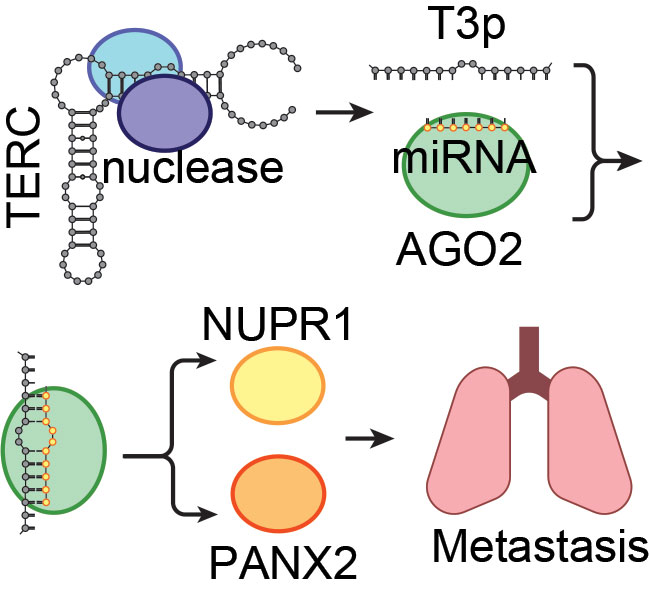 We have recently annotated a new class of small RNAs, which we have named oncRNAs. These are largely absent in normal cells but emerge in cancer cells as a result of cellular transformation. We have demonstrated that cancer cells can "adopt" these orphan RNAs to carry out new functions relevant to the progression of the disease. Another benefit of oncRNAs became apparent once we realized that a large fraction of oncRNAs are released by cancer cells in exosomes. We think that since every tumor can be assigned a digital oncRNA barcode, i.e. a profile of oncRNA presence/absence, finding evidence of this barcode outside the cell can point to the existence of an underlying cancer cell from which these RNAs originate. You can read the paper in November's issue of Nature Medicine. You can also read a new release by UCSF on our work. 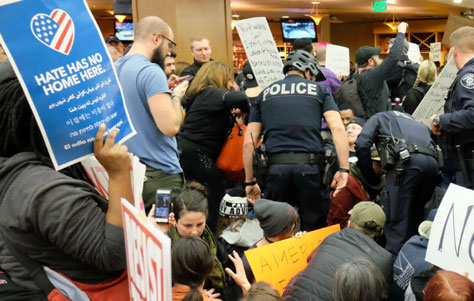 Read Hani's opinion piece on the impact of the travel ban on students and scholars, and the scientific community published in the Scientistl. You can also read an interview by a number of UCSF faculty with the Washington Post on this issue. 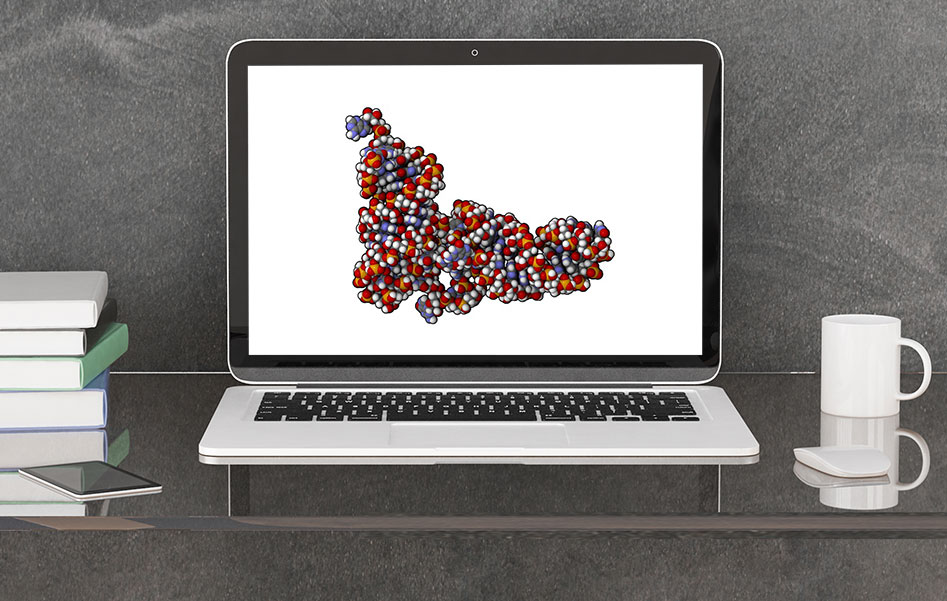 Hani Goodarzi was awarded the AACR-Takeda Oncology NextGen Grant for Transformative Research by the American Association for Cancer Research (AACR). This award represents the AACR’s flagship funding initiative to stimulate highly innovative research from young investigators. This grant mechanism is intended to promote and support creative, paradigm-shifting cancer research that may not be funded through conventional channels.

Hani Goodarzi was named a Kimmel Scholar by the Sidney Kimmel Foundation. Begun in 1997, the Kimmel Scholars Program was designed to jump-start the careers of the most promising and creative researchers and physician-scientists seeking solutions to the riddle of cancer. Over the two decades, the Program has contributed some of the most successful members to the next generation, or maybe two, of the nation’s leading cancer researchers. 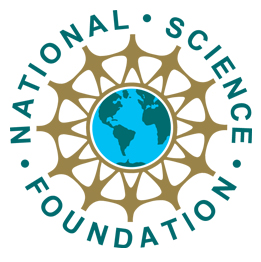 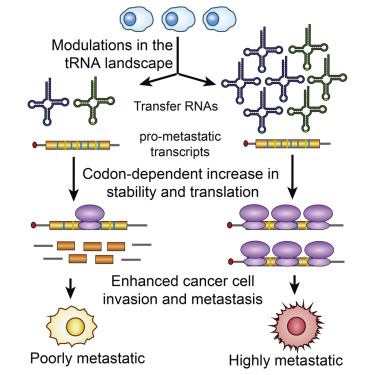 Transfer-RNAs are tranditionally viewed as a static component of the protein synthesis machinery. Recently, several studies have raised the possibility that tRNAs are more dynamic and can support different cellular states and phenotypes. Although generally debated, some evidence has emerged that tRNA levels in the cell imapct the gene expression landscape in the cell. In a recent study, we demonstrated that the tRNA landscape is drastically modified in highly metastatic cells and that these modulations drive the expression of key promoters of metastasis. These results were published in Cell. You can also read a short preview about this study. 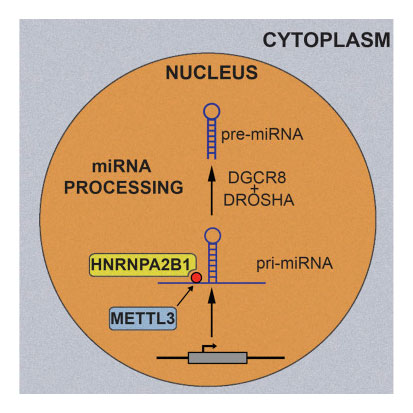 Nucleotide modifications can expand the information content of nucleic acids. The majority of these chemical modifications are largely uncharacterized. The most common base modification of eukaryotic mRNA is methylation of the N6 nitrogen on adenosine referred to (m6A). In two recent papers, we have described the role of m6A RNA modification as a marker for RNA processing. We showed that RNA-binding protein HNRNPA2B1 can preferentially bind this modification and impact miRNA processing and splicing. These results were published in Nature and Cell. You can also read a short blog post about this study. 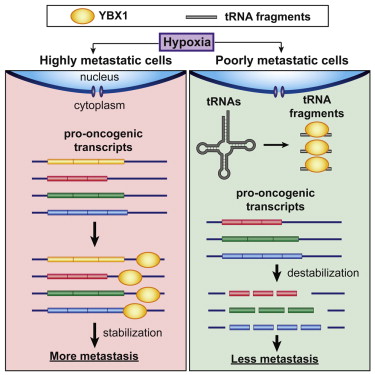 Cells respond to stress through a variety of mechanisms. In this study, we identified a mechanistically novel post-transcriptional regulatory pathways that protects the cells from pathologic growth and spread. We showed that a novel class of tRNA fragments (tRFs) that are generated under stress in normal and poorly metastatic cells, evade induction in highly metastatic cells. Using mechsnitic in vitro and in vivo experiments, we demonstrated that the oncogenic RNA-binding protein YBX1 is titrated by these fragments, which in turn reduces the expression of the YBX1 regulon. These results were published in the journal Cell and highlighted in Nature Reviews Cancer. 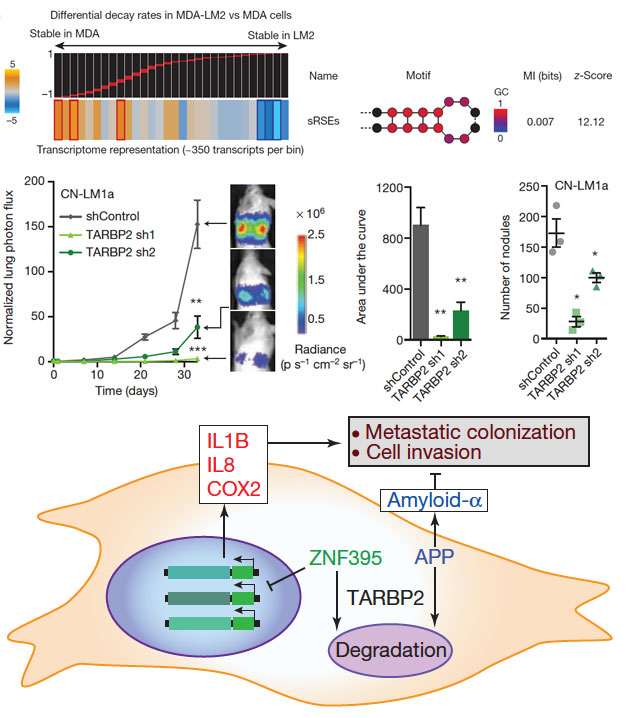 Aberrant regulation of RNA stability has an important role in many disease states. Whole-genome transcript stability measurements in poorly metastatic and highly metastatic breast cancer cells paved the way for the identification of a structural RNA element the presence of which results in higher decay rate in metastatic cells. We subsequently identified the dsRBP TARBP2 as the interacting partner and showed that this RNA-binding protein plays a functional role in promoting breast cancer metastasis. Focused computational and experimental follow-ups revealed that TARBP2 mediates metastasis through destabilization of novel tumor suppressors, ZNF395 and APP. The results were published in Nature (2014). We also published an invited editorial feature in Cell cycle journal based on this study. Our work was also highlighted by the editors at Nature Cancer Reviews. 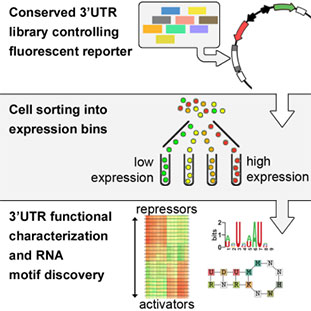 Gene expression is highly regulated in order to achieve the requisite repertoire of RNA and protein products across the vast space of possible cellular phenotypes encompassing physiological and developmental contingencies. Five years ago, we embarked on a path to catalog the sequences in RNA that play substantial regulatory roles, by providing linear or structural information for factors to recognize and act on. We used a library of conserved 3'UTR sequences, synthesized on a custom-designed Agilent microarray and cloned in a dual-reporter system, to measure their impact on gene expression in a controled setting. Our results were recently published in Cell Reports. To learn more, you can read a short synopsis of our work here. 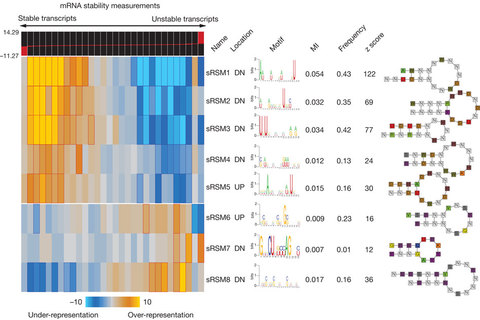 Decoding post-transcriptional regulatory programs in RNA is a critical step towards the larger goal of developing predictive dynamical models of cellular behaviour. The vast landscape of RNA regulatory elements remains largely uncharacterized. We recently described a computational framework based on context-free grammars and mutual information that systematically explores the immense space of small structural elements and reveals motifs that are significantly informative of genome-wide measurements of RNA behaviour. TEISER (tool for eliciting informative structural elements in RNA), which marks our first successful attempt to reveal structural regulatory elements that underlie transcript stability in vivo was recently published. This study was published in the May 10th (2012) issue of Nature. TEISER can be downloaded here. A limited version has also been integrated into iGET for public use.

Want to discuss a project?

Do you have ideas that you think may help us do a better science? Then...